You are here: Home / Archives for Case Study

In my second blog entry I highlighted a case study of a successful ISV that was able to grow its business by doing the channel development by identifying an impactful approach where the VAR channel felt that it was a win-win situation for both sides.

In this blog entry I am high lightening the VAR development program (Phase 1) that SolidWorks created for its channel and as I stated in my previous blog, this program was almost like a mini-MBA where the ISV wanted to facilitate and help its VAR channel to run its business more effectively. The program that David Skok highlights in his blog entry as phase 1 of the development program is divided into two main areas: Business Management and Sales Management.

From the picture above, the channel assessment was reviewed from these two perspectives and each of these perspectives are divided into smaller components that have relevance specifically when running a VAR business.

Cash is king as they say and I have also experienced this as an entrepreneur. What ISVs tend to forget is that somebody has to fund the activity to build the funnel of the solution that the ISV wants to sell. So lets review the typical steps that we expect to happen when an ISV signs up new channel partner:

With all of the effort that has been put into the joint effort, the VAR finally signs its first deal and now everybody can be happy. On top of this, the deal is very sizable and this makes the VAR a bit nervous as there are some financial risks that it now has to carry as it carries the paper with the end user organization.

The project starts, everybody is working hard on getting the client happy but sudden and unexpected issues comes up in the implementation. The customer tells the VAR that it is unacceptable and they will not pay until the software has been fixed. The VAR tells the customer that they do not have the means to fix it as it is the ISV that carries that responsibility. The customer tells the VAR that that is not their problem, the responsibility is with the VAR as that is whom they bought the solution from.

As the invoicing relationship of the solution delivery is between the VAR and the end user organization, the VAR runs into issues as an invoice has already been issued from the ISV and they want to get paid.  This puts the VAR management to sweat and now they really understand the consequences of this and need to do something about it.  The ISV wants to get paid, but the channel partner has not got paid yet. Worse than this, the software included bugs that the VAR can’t do anything about and has to wait for a fix. The ISV still wants to get paid, no matter what as its view is that this issue has nothing to do with them. I am sure you get the scoop of the vicious circle.

If the ISV is reasonable, they will work with the VAR and the end user customer to get it right, but unfortunately I have seen cases where the VAR has really run into a wall. I can’t imagine how that feels as I run my own business every day and have to consider risks and rewards when conducting the business. In large organizations with huge cash piles, this might not be a problem, but for the majority of ISVs, SIs and MSPs, this could be a huge issue.

The scenario above describes some of the areas where the VAR has to pay special attention when running its business. The number one in business management side is cash flow and how to manage it when dealing with ISVs and purchase management overall. I have run companies with high growth and one of the most pressing issue seems always be cash flow. People want growth, but with growth you need cash flow. Sales in your books does not mean that you have money in your bank account. Having lots of receivables might feel good, but you can’t feed your family with receivables.

The second area is “Sales Capacity” where typically small VARs become the victims of their own success. Skok concludes that a typical successful VAR is where the business owner is number one in sales, but one person does not scale up to grow the company. There needs to be more than one to scale the business. If the owner becomes the gatekeeper, then that becomes the bottleneck for the growth for both the VAR and the ISV.  What a VAR needs is a strong sales manager that can scale the sales, follow and create processes and the owners should keep away from that (my observation).

Also, what is typically undervalued among VARs and ISVs is market research and what sales people tend to use as an excuse for poor sales is that the “market segment is saturated’. Good research includes information about market size, market share, historic customer growth rates and sales coverage etc..

According to Skok, one of the most difficult task that VARs are struggling with is the requitement. I can really believe this. The key for success is to build an interview process to identify the right candidates and even if you become good at this, you will still fail. I have.

What an ISV might see with its channel is that VARs are hiring new employees, but there are more leaving the company that coming in. So what will happen is that the VAR has new people that are learning “the ropes” and then the ones that have learned are leaving for different reasons. The VAR ends up having a situation where the skills don’t meet the demand of the market.

One key thing that is often ignored is to ensure that the employees have a good view of their professional development,  like sales people having strong  product training, presentation training, and  sales management training.

And finally, and probably one of the most difficult tasks: how to manage and review the pipeline that everybody presents to the management. How should the VAR and ISV ensure consistency in the pipeline? One of the key things for both ISV and VAR is to create a standardized view on the pipeline, not based on each and every sales persons personal definition which is typically biased to his/her own preferences.

The question is what kind of deliverables can an ISV and VAR expect from both Business and Sales Management exercise? The way Skok defines them is in following way: 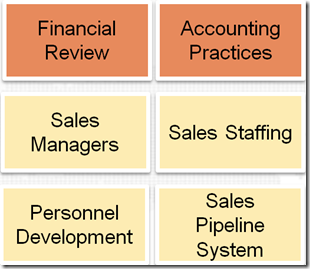 It is obvious that each one of these need to be worked on and each ISV will have to estimate how much to put effort into this exercise. Also, what something might work for one organization, could be very different for another.

The next phase of this case study I will discuss about the way that the case study ISV segmented and categorized its VARs and their ability to grow. Stay tuned for more.